“Pot is really not my thing,” says award-winning science author and Bainbridge Islander Bruce Barcott. As the father of two teenagers, he had serious reservations about the wisdom of legalizing marijuana, and in 2012 he almost voted against it. 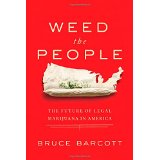 When the vote passed he began to wonder, “What in the world have we done?” and ended up spending the next two years researching the subject.  The resulting book, Weed the People: The Future of Legalized Marijuana in America,will be officially published on April 6, and Barcott will be launching and signing books Thursday, April 16; 7:30 pm at the Treehouse Cafe in Lynwood.

In this podcast BCB host Channie Peters asks Barcott how he feels about marijuana now after studying the problem.  “What we have here,” says Barcott, “is one of the most unusual social experiments of the 21st century.” Whether or not that experiment fails, he finds his thinking now about the drug has changed.  He’s come away with a more open mind, and sees the drug as basically a mild intoxicant, like alcohol, and one that should be treated as such.

And, says Barcott, as a result of his research, he finds it much easier now to talk about it with his kids, and with other parents of teenagers.

To meet Bruce Barcott and hear more of what he’s learned about Marijuana and legalization, come to his book launch at the Treehouse April 16th, which is sponsored by Eagle Harbor Books. To learn more, visit EagleHarborBooks.com.